Side by Side – The Story Behind the Painting 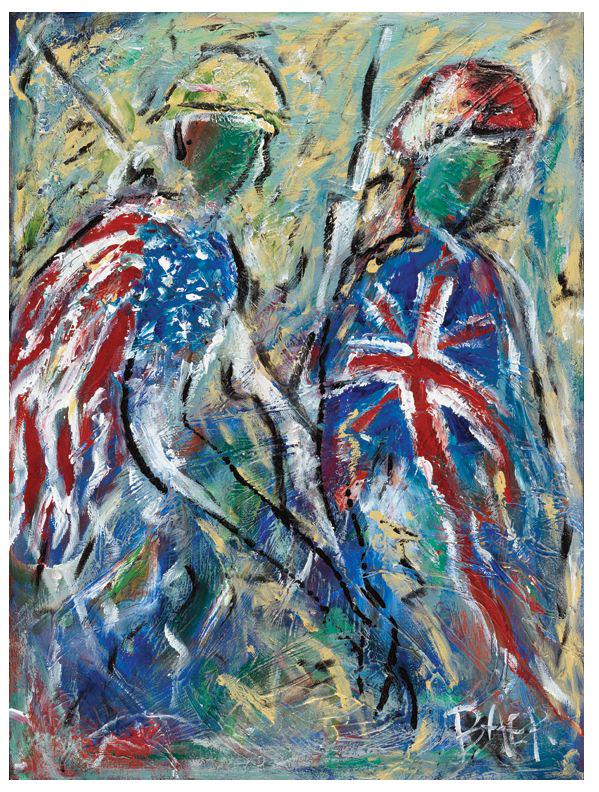 In 2008, Washington DC based Azalea Charities commissioned me to create a painting that depicted the strong military relationship between the US and UK. I had several points of reference and memories to work with as I had met several British soldiers thru NATO exercises while in the US Air Force stationed in Germany during the end of the cold war in 1989 -90. The images and symbolism just appeared on the canvas through free thought and association. The title being my final thought.

The painting was officially unveiled at the British Embassy in Washington DC on Oct. 9th, 2008, and was greeted with tremendous positive reaction from both US and British attendees. British Major General (Ret.) Phil Jones made the following profound and supportive statement about the Side by Side (SBS)painting:

“ Beyond the strategic relationship, so many of us from both nations have fought literally side by side, that this modern relationship between the US and UK military means a great deal to us. It has a depth and an emotion to it that is profound... “

Since then, the SBS image has helped raise thousands of dollars in fundraising through sales of prints, notecards, t-shirts, and a wine label/product in support of wounded soldiers.

Recently I was contacted by the U.S. Embassy & Consulates in the United Kingdom requesting use of the Side by Side image to associate with their public events commemorating the centenary of the US entry into the First World War and focus on the US/UK special relationship. I am humbled and honored that the SBS image and message continues to have such a profound impact. https://www.DeanJBaer.com