Freedom of Expression – The Story Behind the Painting 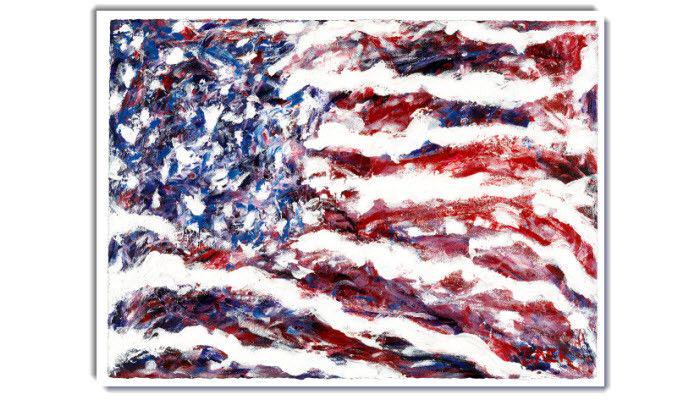 I was staring at a blank canvas in my Northern Virginia studio in 2005. Patriotism was at an all time high as we continued to rebound from the attacks on our country. I was reflecting on all the freedoms we enjoy and sometimes take for granted and attempted to carry those thoughts over to a canvas.

Without surrendering our national identity, I wanted to create a work of art that had the appearance of something limitless, something without boundaries, something lofty, attainable, and at the same time a work that would honor those who sacrificed their very lives for the freedom we enjoy here in the United States. As an artist, I felt Freedom of Expression was a fitting title for this work.

The image was so well received that I created and launched a National project called The Gift of Freedom. The project offered fundraising support to numerous charities whose missions complimented the Freedom of Expression message. I provided participating charities with limited and open prints and note-card products which they sold and auctioned at fundraising events. After successful completion of the project, I found the perfect home for my painting at the newly constructed National Museum of the Marine Corps in Quantico, Virginia.

” Quantico, Virginia – The National Association for Music Education's (MENC) Caitlin Merie Hurrey Fund and nationally known Artist Dean J. Baer collaborated to donate his Freedom of Expression painting to the National Museum of the Marine Corps/Marine Corps Heritage Foundation. “ The Heritage Foundation is extremely grateful for such a meaningful contribution that pays tribute to the U.S. Marines and attests to the Corps' courage, commitment and service to our Nation .” Lt Gen Ron Christmas, United States Marine Corps (Ret), President, Marine Corps Heritage Foundation. “ I am honored and humbled to have this painting on display at The National Museum of the Marine Corps… as I can think of no better place given the message this image conveys ,” said Baer. After the dedication, I continued my support of the museum by producing Freedom of Expression limited and open edition prints, note cards, t-shirts, and coffee mug products available at the museum gift shop. I also made several “meet the artist” appearances and signings on Veteran's and Memorial Day events .

Dedication: “ Many of our fellow Americans have died for this country; they did so for 'Life, Liberty, and the Pursuit of Happiness.' Based upon this priceless sacrifice of those who have gone before, that act has allowed me as an artist to express myself without limitation or restraint. “Freedom of Expression” is dedicated to all Americans, past, present and future, especially all those who strive for justice, equality, and freedom worldwide. “ – Artist Dean J. Baer

Freedom of Expression (30” x 22”) resides at The National Museum of the Marine Corps, Quantico, VA. https://www.DeanJBaer.com